Associate Polarity Practitioner
The beginning student is first introduced to the notion that all life is an expression of energy in motion, and that energy emerges from and returns to a central unified source of life energy. Energy in the body is a manifestation of the cyclic journey of spirit: from its cosmic unified source, into the duality of the physical realm, and back to its source.

This theme is further developed with the concept of unity and neutrality and the creation of the polarized opposite forces of attraction and repulsion. These two forces, in turn, follow the blueprint inherent within their source as they mutually interact to weave the fabric of manifest life. Consequently, all forms and processes are generated from within the universal source of life energy, and are expressions of that life energy in motion.

The theory is further delineated with the formation of the three primary principles of motion as Sattva, the neutral Airy Principle, Rajas, the positive Fiery Principle, and Tamas, the negative Watery Principle. These three principles set the stage for energy to manifest as five discreet qualities or steps, characterized by the five elements of Ether, Air, Fire, Water, and Earth. 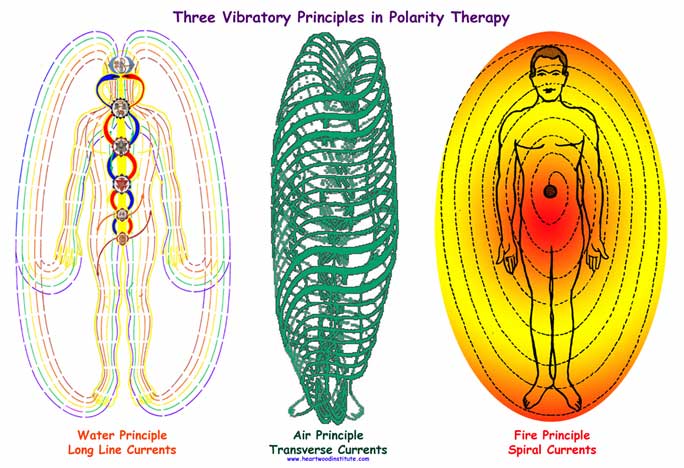 By virtue of these elements, the physical human body is created. The body is a composite of the interaction of the five elements (which are electromagnetic in nature) in the physical domain. The body, then, is an electromagnetic energy system expressing the dynamic interplay of the five elements from their most subtle to their most dense forms. Each form manifests a unique anatomy, with the most subtle form expressed as a "wireless" circuitry directing the flow of energy in its etheric state. Thus are created not only all aspects of the body, but also the totality of human expression, described by Dr. Stone as the Pentamirus combination of the elements.

The student is also introduced to the idea that healing and disease are processes that can be described in energetic terms. Generally, healing and health are attributes of energy flowing in its natural and unobstructed state, while disease is a reflection of energy in an obstructed condition in one or more of its several levels of manifestation.

Ether is seen as the manifestation of a free, uninterrupted energy flow, experienced as a state of freedom of expression, creativity, movement and health. As energy becomes blocked in its pathway of motion back to its energy center in the body, the body experiences varying states of ill health, or disease. These states, varying from mental and emotional disturbance, to acute physical inflammation, to chronic illness, and finally to full degeneration, are characterized by energetic states corresponding to the four step down elements of Air, Fire, Water, and Earth, respectively.

As disease is regarded as the effect of energy being disrupted in its flow, healing is seen as the process of releasing the obstructions to the free flow of energy so that it may fully reconnect with its source. Consequently, a return to physical health is the reconnection of energies in the body with their respective centers or sources.

This relationship between health and energy connecting with its source is expanded to include any system. That is, the health of any system is dependent upon its full, undisrupted connection with its source. With this understanding, the underlying principle of Polarity Therapy emerges as the idea of "reconnection to a source" and pertains to each facet of the work. This includes establishing reconnections to sources of energy in the body, in nature, in interpersonal and societal relationships, and within oneself, to the source of life energy itself. Health is considered in its larger context beyond just the body, recognizing the interconnectedness of all things to each other and to a unified central source of life energy.

Registered Polarity Practitioner
Once an understanding has been derived as to how energy relates to form and process, the study delves deeper into the dynamics of how the body is created and functions as an energy system. The body is seen as a system of energy fields and centers, "wireless" energy pathways, lines of force, and geometric and harmonic relationships. The energies of the body are derived from and organized around a central ultrasonic core. The ultrasonic core is an expression of primary energy as the neutral essence. This neutral essence is stored in and conveyed by cerebrospinal fluid throughout the whole of the human system. The neutral essence is considered to be the basic ordering and healing principle in the human body.

The ultrasonic core is the central pathway of motion along which the five primary centers are created, located anatomically along the central canal of the spinal cord. Two intertwining currents of pranic energy, each the polarized opposite of the other, pursue a double helical pathway along this core, creating the five chakras or whirling energy centers of Ether, Air, Fire, Water, and Earth, located in the center of the throat, behind the heart, in the solar plexus behind the umbilicus, at the lumbosacral junction and at the sacrococcygeal junction, respectively. In this way the five sensory pranas are formed in order to allow the perception of our physical experience.

Similarly, five motor pranas are formed from two currents also emergent from the entry point of the ultrasonic core, at the eye center. These two currents form the five primary oval fields of the head, neck, chest, abdomen and pelvis, representing the five elements of Fire, Ether, Air, Earth and Water, respectively. These five fields enable the body to interact with its environment. They also contain the five primary chakras of perception and establish an energetic physiology as the motor and sensory pranas commingle. 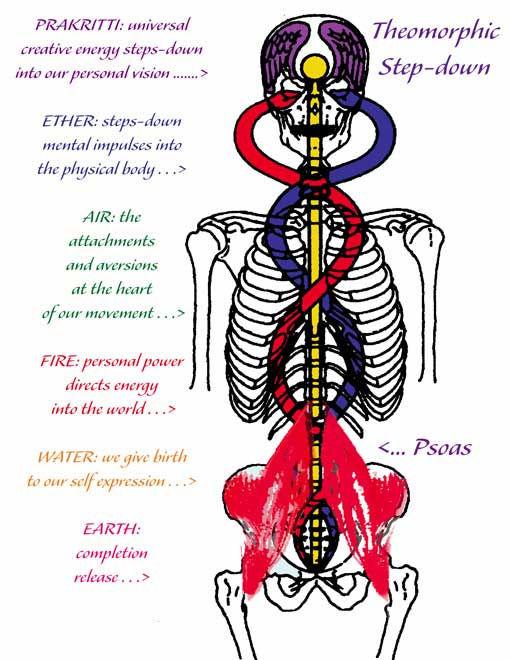 Theomorphic step-down of energy.
The chakras parallel the planes of creation.
The body personifies the process of creation.*
From Burger, Esoteric Anatomy

From the ultrasonic core and the five primary chakras emerge currents of subtle electro-magnetic energy that fill the space of the etheric body with etheric energy waves. The pathways of these etheric energy waves create a "wireless" circuitry that interconnect every point of this subtle form with every other point within the energetic system. The pathways follow three distinct directions as vertical North-South Watery currents on the right and left sides of the body, coronally spiraling Fiery currents on the anterior and posterior aspects of the body, and transverse East-West Airy currents intertwining horizontally from the feet to the head. These three primary currents create an interwoven field which expresses the three principles of energy movement (also known as the Gunas).
The energy body created by these three etheric energy wave circuits describes a spatially oriented triaxial set of polarity relationships as to top (+) and bottom (-), anterior (+) and posterior (-), and right (+) and left (-). The center of the body lying in between any of the three axes is neutral.

The three principles of energy movement are the primary forces that are expressed as fundamental relationships in the centers and fields of the body. These relationships allow the creation and interweaving of the five elements and are first expressed in the creation of the eye center and head.

From this level, energy is projected into the physical domain and the physical body via the five elements. The projected energy creates the arena in which life is experienced. These same energies are then reflected back as sensory feedback. This reflection of sensory information modulates the continued projection which, in turn, modifies additional reflected feedback. In this way the projection-reflection loop tempers our perception and experience of life. 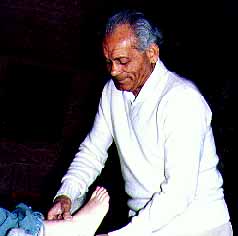 
The body is seen as an intricate and dynamic interplay of the Three Principles and Five Elements which creates its subtle anatomy and physiology. Furthermore, the Three Principles and Five Elements are understood to make up more than the body alone. They intercombine in their many states to create all aspects of human expression, including body, emotions, mind, and spirit.

The five chakras, which first define the elements in the physical realm, are expressed negatively as the emotions of pride (Ether), greed (Air), anger (Fire), attachment (Water) and fear (Earth). This is the experience of humankind when the attention is directed entirely down- ward and outward into the world for the purpose of identifying the ego with the worldly creation, thinking itself the prime mover of life. In contrast, when the attention is directed inward and upward, acknowledging the source of life energy as the doer behind our experience and understanding of the world and ourselves, the passions transform into the five virtues of courage (Earth), detachment (Water), forgiveness (Fire), contentment (Air) and humility (Ether).

Beyond the passions and virtues, the elements express our experience of emotion, gross and subtle body movement, and lifestyle habits as well as the fluids and tissues of the coarse metabolic body. Dr. Stone describes these element intercombinations through the Pentamirus Combinations. Each element predominantly influences the other four elements in some aspect of our experience.

Dr. Stone points out that the representation of the elements as the various qualities of our personal experience of worldly life are separate from the observer of life. In short, we are not the elements. We watch them weave their play. We can watch with respectful distance and appreciate the tapestry, or get caught up in the weave and lose sight of who we are, where we are, and where we are going.

Dr. Stone strongly acknowledges the role of consciousness as it affects the energies of the body. He describes a hierarchy of consciousness from the most sublime states of being to the coarsest levels of life. In the realms of mind, consciousness may be experienced in many ways and forms, all of which embody particular frequencies or vibrations of energy. Dr. Stone's statement "Energy is the real substance behind the appearance of matter and forms" therefore applies to consciousness as well as physical phenomena.

Thoughts impact form according to the energetic charge and wave form of the thought; these are significant forces or stresses to be reckoned with in the physical body. The energies of the body change and transform in accordance with the form of the impacting thought, thereby affecting the integrity and health of the system.

From emotions, to physical states, to the overall quality of life, the interplay of the principles and elements expresses our state of mind and health. As the energies are disrupted in their motion away from and back toward their respective centers both in the body and in nature, we experience the stepped-down states of pathology, both organically and psychologically.

The more disturbed the flow of energy in the body, the more inefficiently the body functions. The body's energies shift from their concentric flow around the ultrasonic core toward an increasingly eccentric motion. The intent of the Polarity practitioner is to assist the body's re-establishment of concentric energy movement by releasing blocked energy in the body and guiding the client to do the same in all aspects of his or her life. Once blocks to this free flow are released, energy naturally returns to its source, whether in the body, in nature, or throughout the domain of consciousness.